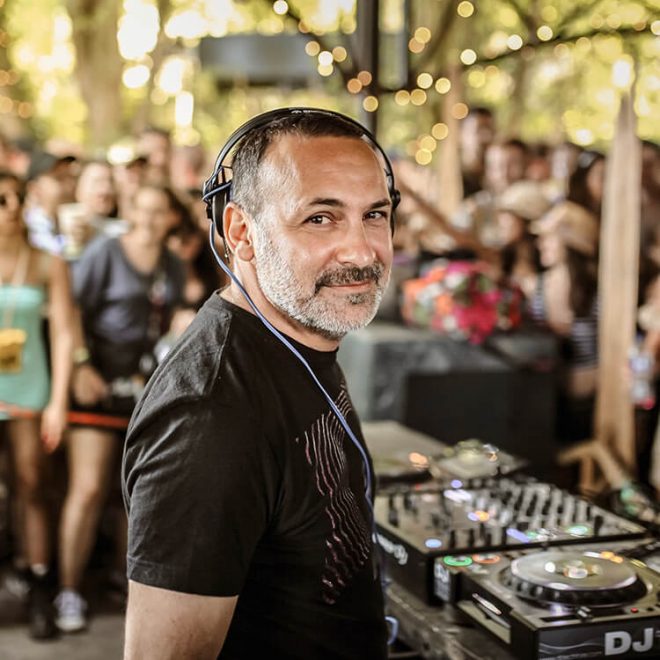 Late Nite Tuff Guy is one of our favourite producers and DJs on the planet right now.

Since exploding onto the scene a few years ago, Late Nite Tuff Guy has forged a position as one of the most in-demand and best-loved DJ/producers on the planet, with Greg Wilson rightly referring to him as “a leading light of the global re-edits movement.”

A superhero of soul, a destroyer of dance floors and a purveyor of the smoothest sounds this side of 1977, LNTG is synonymous with the sexiest of sets and the most credible of disco edits, and has amassed legions of devoted fans from every corner of the globe.

With a boy in every port and girls in every club, crowds in Berlin, London, Melbourne, Glasgow, Paris, Dublin and beyond have all succumbed to his spell.

He’s also a highly sought after producer for some of the world’s biggest artists and most iconic record labels, and has completed official remixes for the likes of New Order, Herb Alpert and Timmy Thomas.

LNTG’s edits and sets have received serious acclaim from an illustrious roll call of heads in the know, including Todd Terje, Ellen Alien, Steve Lawler, Carl Cox, Nic Fanciulli, Jackmaster and Optimo, and his production skills have seen him become an online sensation, receiving over eight million plays (and counting) on SoundCloud.

After being approached by iconic and world famous record label ‘Salsoul’ LNTG released a 3 track 12″ to coincide with Record Store Day 2018 internationally.

But while he is bossing all things digital, it’s the clubs and festivals where his heart is at, playing to the people that know and love him and winning over new fans.

Late Nite Tuff Guy is an absolutely superb DJ with immaculate programming and flawless mixing skills, check him out performing for the Mixmag Lab.

Aside from his usual DJ sets, he has been channelling his obsession with Prince into a series of extremely popular tribute shows, proving that he’s one of the few people on the planet who can do Prince’s discography justice.

2018 saw his inaugural American tour as he headed to the home of disco.

Playing everywhere from the Berghain to Bestival, and with influences ranging from Mancuso to Toto, Late Nite Tuff Guy is a new breed of disco vigilante, paying his respects to the past while thrilling the clubbers of today.

It is only right that Greg Wilson has the last word:

“The quality and consistency of Late Nite Tuff Guy’s work has elevated him to the vanguard – he has the knack of picking the right tracks to reinterpret, and his output of essential re-workings has been prolific.”

Also note LNTG is the alter ego of DJ HMC and his deep techno/house sound will appeal to an entirely different crowd. We will be handling bookings for these gigs too so please feel free to contact us with DJ HMC enquiries.

Late Nite Tuff Guy is a new breed of disco vigilante, peddling the most credible disco edits and accruing some serious acclaim from an illustrious roll call of industry people in the know.